Currently Ventuz is only able to control a single subnet with 16 universes with one machine. Why is there a limitation?
It would be good to set ArtnetNode(if unicast enabled), Subnet, Universe within the DMX Nodes.

While all of those are valid points, may I ask you what exactly you're trying to do?

Hi Tammo,
thank you for your anweser. We want to control 20 meters of 144Led/m RGBW Stripe as an Ambientlight behind a videowall.The Artnetnodes support sACN as well, we will check that. Currently we are controlling them with madmapper and controlling the cues with ventuz via osc. We would like to get rid of madmapper. 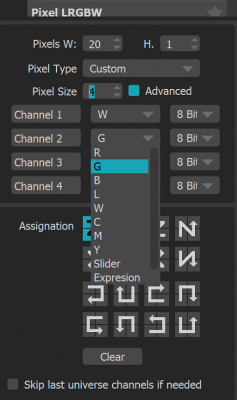