Please report bugs in this group. We will maybe populate a list of known bugs with a possibly modified description at a later time.

I keep having this issue whenever I try to scan my projects through the task bar I get a popup saying "Projects sharing the same GUID are found". I tried solving it by "generate new GUID" but it feels like this does nothing, and I keep getting the same issue.. I have also tried it with different machines using different Ventuz Licenses. 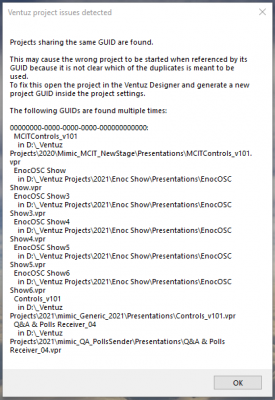 Note, this also happens sometimes when I have VPRs in different Projects.

I'm not sure if this is related, but I think it also leads to another issue i get when trying to run a project through the browser configuration. As you see below, there is a broken icon in the VPR file (Controls_v101.vpr). Nothing happens when I try to run this app by clicking start. but I can still run it via ventuz configuration editor in the machine with no noted issues. 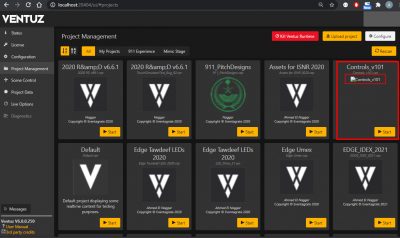 Just do it as the ERROR says: Open the scene/Project in the Designer and generate a new GUIID.
They have all the same ID, how should Ventuz know what to start? Shall Ventuz start ALL projects?

Never have the same project name twice in a search path
Never reuse the same GUIID for several Projects in the search path........

as mentioned above, I've already tried that. it doesn't work.
Plus even if I didn't do it.. there's no way i should have 000000-000-- etc as a GUID correct?
Also, having multiple VPRs in the same project folder is not allowed anymore? shouldn't the VPRs generate new GUID as they are being exported?
Top

It's true that copying a ventuz project file will also copy the GUID, which might lead to that problem. However, when creating new projects or VPRs Ventuz will ask the OS for a GUID which should never occur twice. That's what the name stands for - globally unique identifier. It's not up to the user to take care of those GUIDs. Again, only copying a VZP should generate the problem.

All 0s is not a valid GUID, so there is defenitely something wrong there!

i have opened a ticket. I had the same issue whenever i export a VPR.
Thanks for the Report

Thanks for the Update,

Just a few notes
- I think this has been going on at least since the release of 6.8.0, could be earlier.
- This occurs not only in VPRs in the same project folder, but also in newly created projects with new VPRs.
- unanswered question: could this be related to the broken Icon I get in the browser configuration editor (which cannot be started)?
- Finally, my colleague had a few fatal errors that apparently popped up after delays of trying to start a VPR. She tried running the VPR via Configuration editor on the same machine, about 5 min later the VPR started, and when she closed the show she found the errors as you see below.

This was also Ventuz v.6.8.0. Unfortunately we didn't get the logs of those errors.

The GUID bug was definitely introduced with 6.8.0!
Top

it wasn't in the release notes