The visibility for layers could be pimped a lot! As it already is inspired by Photoshop, you could implement the alt-click action. It disables all other layers, so that the one I clicked it on is the only one visible. And if you want to be even better then that: implement a third option: invisible, visible, locked visible. Locked visible ignores the alt-click. For instance your background layer should always be visible and still you could use alt-click to quickly disable all but one layer!

But: you need to remember which layer was invisible before the alt-click, those should not be set to visible with the second alt-click. It's tricky, but is speeds up things a lot (and V5 needs that!).

thanks for that suggestion! I like that a lot. It's ticketed.

In V5.2 the Render Point is back. Also for Layers now to isolate a Layer independent from the visibility.

The render point?? Or an isolated view?
Glare Productions
Top

The Render Point. For the 3D Hierarchy ( a bit different to V4 ) and for the Layer Editor.
For Layers, it shows that Layer isolated. (Plus the ones with locked visibility)
Top

cool. I know someone who will be very happy about that!

I tried it out, but it's not a render point as it used to be.

Yes, it changed a bit


In contrast to Ventuz 4 or earlier versions the render engine is not starting to traverse the scene tree at the selected node. The whole tree is traversed but meshes outside the isolated subtree are skipped. 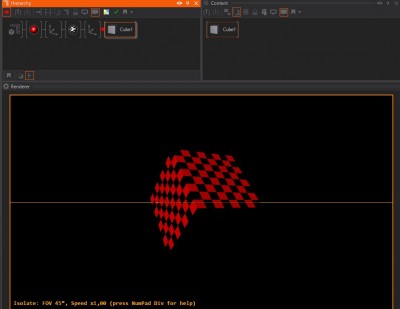 its correct.
In this case the Material and Lighting will be applied as well.

its more or less like the position of the selected object will be put in the center, you can rotate the object or the environment around.
The idea is to have the object seperated from the rest of the scene .. but still keep the lightingconditions.
It should be possible to "deactivate" the materialstage if you want to have it "pure".