Post requests for new Director features or report bugs to this forum group. Any suggestion to expand the possibilities of Ventuz Director are welcome.
Post Reply
4 posts • Page 1 of 1

I regularly work as a video engineer running Spyder X20's for live events. I have gotten very use to having command key of looks using a Preview/Program buttom of each set looks.

I would love to see a way to be able to set a look in across a few channels/layers and save that as a look for quick recall. The recall would be a single button to cue up a look across multiple layers then Take to Program recalling only the layer active in that look.

As I get more time working with director I will get familiar with the playlists and time line. But feel the power of quickly being able to make a preset button that will control multiple layers in one click. Also having some rules that could read if the scene is already live in a layer to have it do or not do a specific action on take.

Thanks you for listen and hope this all make sense.

Attached is a picture of the Spyder control software in case you are not familiar with it. Showing the Preview/Program Command keys and they layers. 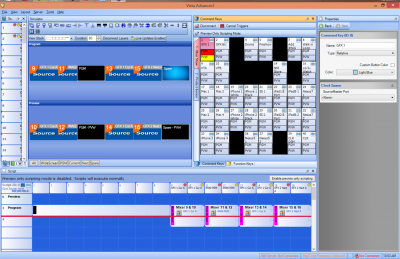 Thank you for you time and reply. Here are some answers to your questions.

- Would you be able to compile (and perhaps extend) the visual studio project yourself so we don't need to ship a binary version?

I am learning VS and C# right now to deal with the Thalmic Myo DLL wrapper. So I would think that I could learn to do that as I have planned to try to learn to write a director plug in later on. I am not a real coder but often can edit others code to my needs.

- Do you need both the prv/prg buttons? I was thinking of rather having a cue button that works exactly like in the spyder interface but then do a take button for each key that takes only the layers in the key. The "prg" button looks to me like a cue+automatic-take button and I'm wondering if the user shouldn't be forced to preview the key and manually press the take.

The PRE button load the sources and does the routing needed. Then PGM advances one cue in the script. If you do just the PGM button it doe the Cue and auto take as quick as it can. Being that scenes need a moment to load, I would expect to have to preview.

- When you record a key, should it just check which channels are filled or should it record the state of all channels where user-interactivity is active? The latter might be a bit more difficult to understand but would allow the user to record a mixture of filled and empty channels.

- Do you need the functionality to arrange the keys (i.e. move it to an arbitrary position in the raster) or would it be okay if generating a key would always use the next free space to the right and you cannot move them later on?

It would be a nice feature, but low on the list of needs.

- Would it be okay if this is only restricted to single-take-templates? Dealing with multi-take templates would make the plug-in a bit more complicated.

Yeah single takes would work. But as thing get more complex it would be limiting.
I could also see that having a command key being a reference point in the timeline or being able to load its own complex timeline with it own complex individual layer control scripting.

- What does the "add screen" menu entry do? I get what preview, program and empty do.

The add command key can be made by Preview, Program, or only save data from a single Screen pixel space. For Director that would be like add from a single layer. I almost never use the add from screen, nor would be looking for it in director.


I hope that all makes sense. Having cueing like this would be helpful for the live staging events in my mind where your show can take a turn at any moment. Most these thoughts are just because my brain is so use to the spyder interface that its the way I think. Thank you again for listening to the input.

This was mostly just a thought I had for recall that would be closer the to work style I have been doing for years. I appreciate just you listening and commenting on my ideas.

In the mean time I will see how far I can get writing some type of director plug in so if you get the time to make anything I am ready to edit and use it.

Looks like a great tool! Hope I get time soon to test it out and try to edit for my needs.
-Sherman
Meru Interactive
Top
Post Reply
4 posts • Page 1 of 1