Please report bugs in this group. We will maybe populate a list of known bugs with a possibly modified description at a later time.

Hello,
i have a touch keyboard and with a C#-script and i use the unicode to identify the letters etc., works fine. I use string-varibles as output and in the property editor everything looks fine.
But when i connect this outputs to a TextNode, the TextNode doesn't update his output. If you switch, for example the Kernel flag on/off it updates.
You can see in the property editor that the incoming string is correct, but not the output.
The same with the ValueSwitch. You have to switch between the case to update the output.

... and other funny things: 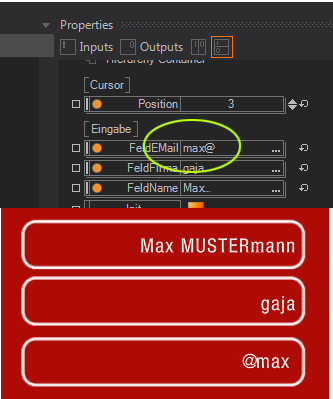 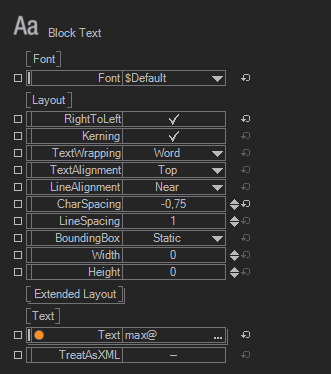 Hi Karol,
yes, i did. The C#-Script-Node seems not the problem, it works fine

. I can see it in the property editor, it does what it should be to do. The problem i've got in to is, that the output bindings, which values are correct, are not updated correct in the TextNodes. The TextNodes are in different HierachyContainers, but i have the same if i connect a TextNode directly to the Output of the C#-Node.
The same with a different C#-Script which mange some int's, the output is a single int. The C#-Script forks fine, but when i plug the output to a int-expression, the expression don't work correct. My workaround, i use the output from the C#-Script ( the single int) as a event argument which reset a counter with argument-option on. That's work...

Btw, the switched "@" in the pics was gone after a restart of ventuz.
3DJo - [Ventuz] freelancer and trainer
Top

But with the trick, the output to use as a Event-Argument, it works...
3DJo - [Ventuz] freelancer and trainer
Top

So if the 'changed' property in your Script is updated correctly on property changes, I have no other ideas what could be going on.
You would have to post the part of your scene with the Script node and we could take a look inside.
If you don't want to share it with the public, you can send me a PM.

Two problem in your Script:

1. Your Generate() method must look like this: your code never returned true!!!

2. All of your EventHandler Methods (On...()) must set 'changed = true' as they change the outputs:

Damned... shame on me

Yea, the "changed = true" thing is a pitfall, after this experience i hope it is burned in my brain...